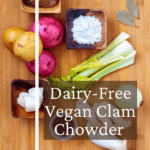 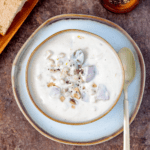 Even though this vegan clam chowder is made without cream, it's so convincing you may imagine yourself sitting on a bench at Fisherman's Wharf in foggy San Fransisco while eating it.

Grab a hunk of sourdough bread or bake up some Easy No-Knead Rolls, and you won't want anything else.

Homemade nut milk is rich and thickens naturally while cooking. Toast your gluten-free flour in vegan butter before adding milk, and you'll have a finished vegan clam chowder that's extra smooth and delicious.

The first step for this warming vegan clam chowder is making your own homemade plant-based milk. You'll be amazed how the combination of cashews, pumpkin seeds, almonds, and vegan butter completely eliminates the need for cow's milk and cream.

Cooking potatoes and clams separately and adding them at the end keeps textures and flavors distinct so they can be fully enjoyed. Plus, the chowder is finished sooner than cooking it all together waiting for the potatoes to soften.

Traditionally, there are two main types of clam chowder, red and white.

The red version, called Manhattan, is made with a thin tomato broth and can include vegetables like carrots and green pepper or red chili flakes, not seen in New England chowder.

New England chowder, sometimes called Boston, is thick, white, and known for its comfort food qualities. The main components are cream, potatoes, and clams. Seasonings like salt pork or bacon vary by region.

The amazing thing is, we've had dinner guests that didn't realize this luxurious vegan clam chowder recipe doesn't contain any dairy or seafood until we told them!

The mushrooms of choice here are pleurotus eryngii. But that's a pretty difficult name to remember, so you can call them trumpet mushrooms.

When searching for them at the store, look for king oyster, French horn, king trumpet, or Alii mushrooms in Hawaii, on the label.

Undoubtedly you're probably wondering just how you can turn mushrooms into a seafood substitute. Full directions are in the recipe card below, but here's a hint.

Firm king oyster mushrooms are so absorbent that all it takes is the right seasoning. My Vegan Fish Sauce is truly amazing for this task and makes all the difference.

Are king oyster and trumpet mushrooms the same?

King oyster, French horn, and king trumpet are all names used for the largest variety of oyster mushrooms. They are thick-stemmed and have an exceptional meaty texture that makes them easy to slice into slabs or dice into firm bits.

Yes. Here's a link from McCormick company, the manufacturer of this classic spice, with some helpful information on all their labeling practices.

Can I use dairy-free milk from the store?

No. This is one recipe where it's essential to make your own plant milk from scratch. Store-bought milk won't have the same thick and creamy consistency and will alter the flavor of the chowder.

Can clam chowder be frozen?

Typically milk and cooked potatoes are two ingredients that don't freeze well at all. However, the thickened homemade dairy-free milk in this recipe freezes just fine. If you want to make the recipe in advance, cook everything except the potatoes. The day you plan to serve the soup, boil potatoes until tender but not falling apart and heat them with the rest of the soup for 5 minutes before serving.

Can I buy vegan fish sauce at the store?

Yes, but I haven't tested any to make a recommendation on a brand. If you want to buy your sauce at the store, just make sure it has a very intense flavor, is savory, briny, evocative of the ocean, and irresistibly delicious. 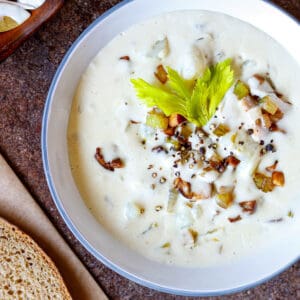 Soak nuts and seeds in advance

Typically milk and cooked potatoes are two ingredients that don't freeze well at all. However, the thickened homemade dairy-free milk in this recipe freezes just fine and with slight modification, you can freeze the chowder. Here's how: Make the make recipe in advance, and cook according to directions except for the potatoes. Leave them out and freeze the remaining chowder. The day you plan to serve the soup, thaw chowder to room temperature. It will be a little lumpy, but that's ok. Once it's reheated and stirred it will regain its creamy consistency. Boil potatoes according to the recipe until tender but not falling apart.  Combine cooked potatoes with thawed chowder and heat everything together until flavors meld and the soup is piping hot, about 5 minutes.