Vegan stew in rich brown gravy with chewy shiitake mushrooms is comfort food at its finest. Everyone needs a good old-fashioned winter stew, right? Meat-eaters and vegans alike will enjoy this straightforward recipe.

This delicious, warming, slow-cooked meal will satisfy all your cravings with its robust flavors and chunky vegetables. Add Pull-Apart Honey Yeast Rolls or Easy No-Knead Bread with a green salad and you can be sure no one will leave the table hungry.

High-quality, whole dried shiitake mushrooms will be crisp and fat with edges that curl in towards the center. Look for short stems and pale gills. Sliced mushrooms are generally of poor quality and don't work for this recipe.

Dried mushrooms can be transformed into the most marvelous substitute for beef in vegan stew. The trick is to choose quality, whole shiitake mushrooms and rehydrate them into juicy, flavor bombs.

You can soak mushrooms by one of two methods for great results. The first method is preferred. However, the second method is fine when you have less time.

Because this stew recipe bakes slowly in the oven, it's ideal for lazy Sundays. Once you prep your casserole and pop it in to cook, you have an hour to kick back any way you like while your casserole bakes.

On top of that, the recipe is easily doubled for company. Place your dish of bubbling vegan stew at the center of your table with its lid on, and it will stay hot while bread is sliced, glasses are filled, and your guests gather.

You may just get oohs and ahhs when you lift the lid, and steamy rosemary aromatherapy fills the room. Hooray, Meatless Mondays for everyone!

I would be thrilled to know if you try this recipe! Leave a comment, rate it, and don’t forget to tag a photo  #poppyswildkitchenrecipes on Instagram. Aloha! 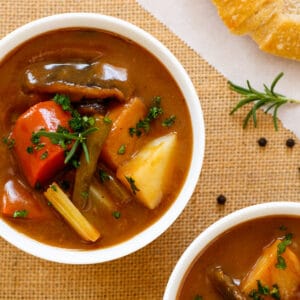 for your weekly recipe fix.

A selection of reader favorites for the cool weather season. Comfort foods, baking, and party dishes.

Tasty dishes to make over and over any time of year. Healthy and nutritious go hand in hand in these tried and true recipes.

Only the best for all your healthy vegan dishes.