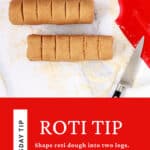 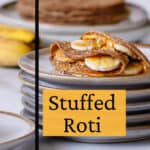 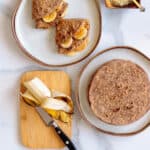 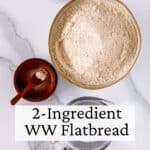 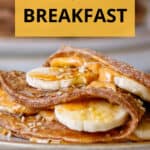 This delicious whole wheat roti is an unleavened Indian flatbread recipe you can count on. Learn the secret to making extra-soft, thick, and chewy 100% stone-ground roti that doesn't take years to master.

You can enjoy these perfectly speckled, foldable flatbreads with Indian, Mexican, and Middle Eastern cuisine or even homemade vegan butter and guava jam.

They are ideal for roll-ups because they remain pliable even when they have cooled off and are refrigerated for several days. I think I enjoy them even more after they are a day old.

Roll all your roti out before cooking them. You can keep them moist stacked between sheets of parchment paper and covered with a damp towel.

All you need for the best freshly cooked roti is wholemeal flour and water. I also like to add some Himalayan pink salt, but that’s optional and up to you.

Which flour is best?

How to make soft roti

I still can’t get over how I can reach into the fridge, grab a cold roti and have it flop gracefully in my hand. These soft, nutritious, individual flatbreads are so convenient for meals in a snap.

This morning I spread peanut butter on one and topped it with a banana, a drizzle of syrup, and a sprinkle of hemp hearts. It was such a yummy breakfast.

That’s why I am excited to pass on my secrets to you. By now, you’ve probably figured out that the difference doesn’t lie in the recipe’s simple ingredients.

No, the two tricks that make this versatile wholemeal bread so tender and chewy are:

Then, kneading the high-hydration dough for 3 minutes on low speed with a stand mixer makes it soft and elastic.

The dough for this recipe is too sticky to knead by hand. That’s why letting a stand mixer do the work for you is especially handy.

Don’t worry, however, if you don’t own a stand mixer. I have an alternate method for you. The solution is actually very simple.

Mix the dough and wrap it tightly in plastic wrap. Let it rest for one to three hours before shaping, cutting, and rolling. The stretchy strands of gluten will soften, relax, and develop on their own. So, you can skip the kneading altogether.

How to roll round roti

Start with a well-floured disc of dough 4 inches across. Roll lightly and don't press the dough out too far for the first steps.

The final trick to rolling round roti is to roll diagonally across the square shape. Twist the rolling pin slightly as you roll to make a perfect circle.

How to puff bread

In India, roti are called phulka when they are transferred from a cooking tawa and held over a direct flame to puff up into round balls. The roti will deflate as they cool, but forming an air pocket while cooking makes the flatbread more tender.

Well, you'll be happy to know this recipe can make puffed bread right in the cast-iron skillet with a little practice.

I love the way steam captured from the wet dough magically puffs up the roti recipe into round balloons when you cook them.

All you need to do is press the edges of the roti with a flat spatula while they are cooking. The recipe card below has full instructions on how to gently coax the air pockets so they will expand.

Dough that is kneaded in a mixer has the best chance of forming large air pockets. Indian flatbread made with the no-knead method won’t balloon up quite as easily and some may not puff.

However, they are just as good in every other way and you never know how far you can get with experience!

Roti is a round, unleavened flatbread originating in India. Traditionally made with stone-ground whole wheat flour and cooked on a flat or slightly concave iron griddle, it has become a staple in many countries. It's a popular side dish with stews and curries and makes a nutritious wrap for vegetable fillings.

What can I use in place of a tawa?

Cast iron in the shape of a skillet or flat griddle are both convenient replacements for a tawa when not available.

The names roti and chapati are often used interchangeably and regional differences make it hard to name exact rules. However, in most cases, chapati is technically considered a type of roti. Even though roti originated as a stone-ground whole-wheat bread cooked on a tawa, it is sometimes made with other flours or cooked in a tandoor open-air oven. Chapati on the other hand are always whole wheat, tend to be thinner than roti, and are not cooked in a tandoor.

Are you ready for these fragrant, soft, delicious wraps? Make this Soft Whole Wheat Roti Recipe, and you can spread or fill them with anything your heart desires. 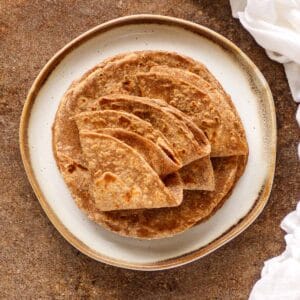 TIPS FOR SUCCESS Mix wholemeal dough with boiling water. Mixer dough can be shaped and rolled right away. No-knead dough should be wrapped tightly and rested 1-3 hours before rolling. Keep dough pieces covered at all times so as not to dry out. Use plenty of flour when rolling. Scrape rolling surface clean as needed. Roll roti 6 inches, not too thick or thin. Roll evenly and avoid pressing edges too hard. Roll all your flatbreads out before cooking and keep covered. You can separate them with parchment paper and cover them with a damp towel. Then you can tend your hot cast iron cooking surface without interruption. Place cooked roti on a plate as you go and cover with an upsidedown bowl or dry tea towel.