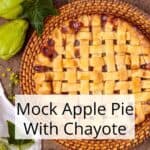 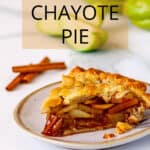 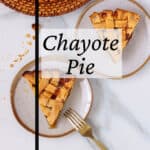 Cinnamon Chayote Pie is one of our favorite desserts because it's the best year-round substitute for old-fashioned apple pie. The filling has layers of tender sliced chayote naturally sweetened with maple syrup, vanilla, and apple juice.

We've had friends and relatives chowing through this faux dessert who didn't even realize they weren't eating apple pie!

In fact, chayote squash, called choko in many regions, makes such a convincing substitute that there are rumors the MacDonald's restaurant chain in Australia used chokos in their hot apple pies.

Since chayote has about one-fourth of the carbohydrates of apple, this could be exciting news for low-carb dessert seekers. Alas for some however the MacDonald's rumor isn't true.

Parboil chayote briefly in plain water before making pie filling. Raw chayote fruit reacts with acidic foods including apple juice and toughens up if it isn't cooked before adding in these ingredients.

Chayote, also called Mirliton squash, vegetable pear, and choko is the fruit of sechium edule, a member of the gourd family.

You can find out where choko comes from, how it grows, and the different ways it's eaten right here on the blog by checking out this link to the chayote plant.

It has such a pleasant, mild flavor that it can be eaten raw or cooked in everything from pickles and stir-fry to dessert.

Two of our best recipes besides pie that include chayote are Sambar Indian Lentil Soup and Crunchy Raw Chayote Salad.

When I first tackled this mock apple pie, I used sugar and bottled apple juice. To me, it seemed a reasonable way to sweeten and infuse chayote with apple flavor.

I found it worked. But as time went on, I started thinking there might be a way to intensify the apple flavor and, at the same time, use a healthier sweetener.

Thus, I switched to maple syrup and unsweetened frozen concentrated apple juice. It worked. It turned mock apple pie filling into a sweet indulgence without refined sugar. How awesome is that?

Chayote isn't hard to cook but has one characteristic that requires special handling. Raw chayote leaves a tacky feeling on your hands when you cut and peel it.

You may not find it a bother, but there is a simple solution if you don't want to have a sticky residue that needs scrubbing from your hands.

Place a large bowl on the counter filled with water. Wet your hands before handling chayote and let the quartered chunks soak in the water while you are peeling and chopping. Easy, peasy.

Once you've aced the tender bite of the mock apple slices, they are just firm enough to hold their own in the beautifully thickened cinnamon sauce.

This scrumptious mock apple pie filling can be baked in any type of double-crust pie shell or you can bake it in a square pan for a mock apple crisp, cobbler, or crumble.

All those options can be gluten-free and it can be served without a crust as a dessert topping.

You can even bake it with vegan puff pastry on top or spoon it hot over over Vanilla Pudding, ice cream, or Coconut Yogurt.

You can eat chayote pie warm with whipped cream or ice cream melting on top. Or you can enjoy its autumn-spice sweetness in a cold slice all on its own.

However you plate it, I think you will agree this scrumptious dessert is an incredible tropical-climate alternative to apple pie. Mahalo chayote! 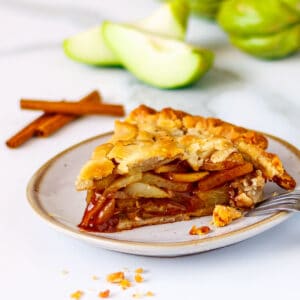 Note - Calories listed above do not include crust

If making a crumble or cobbler variation

Ingredients Apple juice -Be sure to use undiluted concentrated apple juice. Thaw the whole can of juice and stir before measuring for the recipe. Pastry - A standard double crust pastry recipe is enough for the recipe. However use a little more if you want to decorate the top of the pie. Cinnamon - It makes a difference to grind your own cinnamon powder from fresh cinnamon sticks. Crust You can make the pie with homemade pastry dough or choose a variation from this list: Preparation Wet hands and keep chayote in water while peeling and slicing. Slice chayote ⅛ inch thick. Boil chayote briefly so it's tender but not mushy. Cool parboiled chayote and cinnamon sauce before filling unbaked pie shell. Bake pie on second from bottom rack of oven if it has a bottom crust. Cover top of pie with foil when edges have browned. If making a cobbler or crumble without a bottom crust bake it on the middle rack. Storing Pie can be stored at room temperature for two days. If if won't be consumed before then, store it in the refrigerator up to 5 days or in the freezer for 2 months. Tip: you can slice individual pieces before freezing for faster thaw time. Calories Calories are for a one-eighth portion of filling without crust. The total calories will vary depending on the type of crust chosen for the recipe.