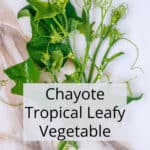 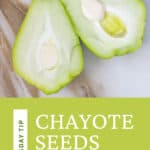 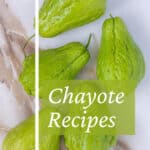 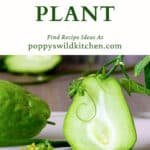 The number of delicious ways chayote can be eaten is astounding. It's versatile for so many recipes. Whether it's made into crunchy salads, marinated for appetizers, simmered in soothing soups, or spicy Indian food, it's delicious. We have even enjoyed it frozen into refreshing chayote-grapefruit sorbet.

Sechium edule is a fruit generally eaten as a vegetable and is native to Mexico and Central America. These days, this mild-tasting member of the gourd family grows prolifically in warm climates around the world.

I find it's one of the easiest plants to grow in my garden on Maui, and love finding new ways to cook with it.

The brown-skinned, underground tubers of chayote are called chinchayote in Mexico and can be cooked and eaten like potatoes.

WebMD describes chayote as a healthy, low-calorie food that is a good source of fiber, vitamin C, and folate.

The leaves and shoots are also edible and contain vitamin A, amino acids, calcium, and iron.

You have never tried this member of the Cucurbitaceae family? Then let me take a stab at describing it. To begin with, its raw flesh is crisp and juicy.

Think of jicama, but less fibrous and more tender. Or, imagine its texture as a cross between water chestnuts and cucumber.

Raw chayote is easily sliced into chunks or grated on a box grater. Its crisp texture is terrific for cutting into spiraled noodles for salads.

Then, you will have to think outside the box to grasp its taste. The taste is mild and lightly sweet, absorbing the seasonings it takes on.

Zucchini might be the closest vegetable in flavor. However, chayote is sweeter than summer squash and has a better consistency when cooked.

Unlike zucchini, which can quickly turn mushy, cooked chayote is soft and succulent but doesn't fall apart.

On average, young fruits weigh a pound. However, chayote can be enjoyed at any stage, from young to mature, when it’s closer to two pounds.

All parts of the chayote plant are delicious and edible. The fruit, seed, and tubers can be eaten raw or cooked. The singular seed inside the fruit is considered a delicacy in many households for its extra nutty flavor.

The leafy part of the chayote plant, as well as the shoots and tendrils, are generally eaten cooked. It took me a while to experiment with them in recipes in spite of the fact that my Filipino friends at the community garden encouraged me to do so.

Once I did, I wondered what took me so long. They are utterly delicious stir-fried with onion and tomato in a little Vegan Fish Sauce. Plus, the shoots cook up almost instantly.

I honestly can't think of a more versatile vegetable than chayote when it comes to choosing a recipe.

Chayote can be sliced, shredded, diced, blended, or juiced raw. It can also be sauteed, fried, steamed, boiled, stewed, stuffed, baked, roasted, or grilled, and that's just a start.

The chayote plant is a valuable commercial crop and has become naturalized in some tropical and subtropical regions of the world.

Generally, the fruit of wild cultivars is more fibrous and not as sweet as the fruit found in markets and grown in home gardens.

Fortunately, it's easy to grow and very prolific with just a little care. Plus, the plants are not susceptible to many diseases or pests.

If you would like to try growing this rewarding vegetable yourself, the tips from U.C. Master Gardeners website on how to plant and grow chayote will set you up for success.

The flowers of sechium edule bloom continually and attract bees supporting both honey production and our planet's health.

How do you pronounce chayote?

Chayote is pronounced chai·ow·tay. Cambridge Dictionary has an audio clip if you want to hear how it sounds in American and British English.

How do I grow chayote in my backyard?

Take a mature fruit from an organic garden or market and let it sit in a cool spot on a counter for about 4 weeks.

Once the seed sprouts on its own from inside the squash and you have a sprout a few inches long, it's ready to plant. Plant chayote on its side with the sprouted portion facing upwards.

You can plant it any time of year in the tropics or three to four weeks after the average last frost in colder climates.

Plant your spouted volunteer near a fence or support with a trellis and check out the video in this link from U.C. Master Gardeners for more tips.

How long does a chayote take to grow?

Chayote plants take about three to four months to reach the fruiting stage.

Yes, sechium edule is naturally perennial in warm climates. It's a good idea to start new chayote plants after about three years if you want the healthiest crops with fewer pests and diseases.
In colder climates that experience frost, it can be grown as an annual when planted in the springtime.

Always be one hundred percent sure of your plant identification if consuming foraged or wild plants. Finally, follow your doctor's advice when eating new or unfamiliar plants, especially if you are pregnant or taking any medications.

Cozy recipes for Autumn weather that bring back baking, warm spices, and time around the family table.