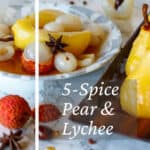 Lychee fruit has been plentiful this summer on the island. It's been a heavenly treat snacking on this raw fruit. Trust me, the burst of biting into the leathery, red skin of chilled fresh lychee and the resulting slippery, juicy drupe is a hard act to follow.

But follow I did, and the reward is this delectable poached pear recipe I hope you will enjoy. Maybe it was the Chinese origins of lychee fruit, or perhaps it was that snap in the mouth, breaking open lychees. But I knew I wanted the dessert to include Chinese Five-Spice with Sichuan peppercorns.

Including Sichuan peppercorns may sound odd if you think of it in the same vein as black pepper or hot chilies. However, Sichuan peppercorn isn't a pepper at all. Instead, it's the dried berry of an ash tree. Plus, on its own, it doesn't have the spicy burn that piper nigrum and capsicum do.

What it does have is an extraordinary tingle that goes so far as to create a numbing sensation. So, cooks in China created a whole cuisine making use of Sichuan peppercorns tactile stimulation.

It amplifies the heat of chili and pepper. If you want to experience this remarkable effect yourself, chew up a single dried Sichuan berry and hold it at the tip of your tongue.

You won't need to add chili powder to feel the unmistakable sparkle. Think of the buzz as pop rocks candy for adults.

Scientists have performed laboratory experiments to correlate Sichuan's physical sensation on the tongue with equivalent hertz vibrations. Maybe I am a bit weird, but I find it so entertaining that they have given Sichuan berries a 50 Hz rating.

Ok, I understand if you are a little confused about this dessert now. However, let me reassure you. Making the recipe in this post won't result in a fruit and spice combination that feels like an electric shock in your mouth. Mild pears and exotic lychee take center stage in a light honey syrup. The Sichuan peppercorn rests obediently in the background with the other sweet, warm spices.

Sometimes though, it's the gentle touch that has the most impact. Try this lovely, festive, Five-Spice Poached Pear and Lychee dessert and see what you think. 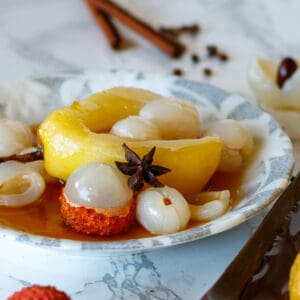 Cozy recipes for Autumn weather that bring back baking, warm spices, and time around the family table.