Toasted Apple Spice Kasha Cereal is cooked buckwheat porridge made into a delicious, healthy breakfast bowl. It's served warm with milk and topped with juicy blueberries and sliced almonds.

We like to serve our kasha cereal with a generous splash of Homemade Almond Milk and a drizzle of real maple syrup. The fact that this 15-minute, whole food morning meal is naturally gluten-free is a happy bonus.

Why this recipe works

How to cook buckwheat porridge

The thing that makes buckwheat porridge taste so marvelous is toasting whole, raw groats before cooking them into cereal. That's when they earn the name kasha.

Is buckwheat a grain?

No. Buckwheat is actually the seed of a flowering plant related to rhubarb and is gluten-free. Old Ways Whole Grain Council explains why it's not a grain or type of wheat.

What's the difference between hulled and unhulled buckwheat?

Unhulled buckwheat has the outer husk intact, is dark in color, and makes a strong tasting dark flour sometimes used in bread. It's not good for cooking into cereal, but great for gardening if you want to grow a cover crop.

Hulled buckwheat has the outer husk removed and is suitable for making pilaf, porridge, pancakes, and noodles. It grinds into a soft, lighter color flour.

Can I use pre-toasted kasha?

Yes, you can. We like to have raw buckwheat on hand for other recipes and freshness. Also, good quality kasha can be expensive, even though it's worth the price. Go right ahead and use it if you have some available.

How do I keep porridge from turning mushy?

That's easy. A lot of kasha recipes call for too much water. This recipe is dialed in with just the right amount. Remove your saucepan from heat as soon as the water is absorbed and let the pan sit covered for a couple of minutes before fluffing with a fork.

I hope you'll give this vegan buckwheat porridge with sweet spiced apple, bursting blueberries, and crunchy sliced almonds a try.

It's so yummy you would need to feel guilty if this whole food, gluten-free, dairy-free, refined sugar-free breakfast wasn't so healthy! 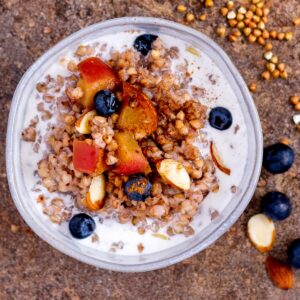 Buckwheat groats - Raw, hulled buckwheat seed is called groats and is light in color. Nut milk - Use your favorite type, almond, cashew or macadamia are all good. Substitute oat milk if you prefer. our favorite is Homemade Almond Milk. Maple syrup - Sweetener is optional and easily substituted with your alternate choice.

Pan toast - Stir constantly while browning in a heavy-bottomed skillet on top of the stove over medium heat. Keep a small dish of raw buckwheat alongside your skillet for comparison so you can see the change in color. Test - When groats change color and are fragrant you can test one by tasting it. It should have a nice dry crunch and not taste bitter. Prevent burning - Just as soon as groats turn a golden color transfer them to a saucepan to add water, apples, and spices.

Store leftover porridge without toppings in a covered container in the refrigerator for up to three days. Reheat cereal in a microwave and add blueberries, almonds, and milk just before serving.

Superfoods are packed with antioxidants that support brain function and longevity. Recipes to feel good every day.

Tasty favorite dishes to make over and over any time of year. Healthy and nutritious go hand in hand in these tried and true recipes.